Mumps in the Time of Dussehra 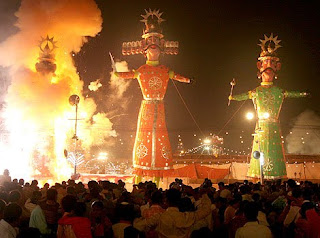 As Rama fitted an arrow to his bow and sent it winging across to the giant effigy of Ravana setting it aflame, I felt a tide of heat spreading between my skin and my flesh. I sidled over to my mother and rested my forehead against her arm. A lot must have happened after that but that's all I remember of the Dussehra when I was nine. My super-heated skin was only the first symptom. I woke up the next morning with a jawline that would've made a bull-frog jealous.

The mumps lasted for about ten days and was forever linked in my mind with Dussehra. This ten-day holiday builds to a crescendo. Rama, the son of Dashratha, was the crown prince of Ayodhya was sentened to exile for 14 years because of the machinations of Kaikeyi, the king's third wife. She wanted her own son Bharata to rule. Following Rama into exile was his brother Lakshmana and his wife Sita, the daughter of the earth goddess. Bharata disappointed his mother by refusing to rule in stead of his brother, that most perfect of men, and in fact an avatar of Lord Vishnu, the Preserver. He dealt with the affairs of state but the pride of place, the actual ruler of Ayodhya was Rama himself, represented by his humble slippers that his brother kept on the throne.

The Ramayana, an ancient epic was written by the sage Valmiki and follows the various events in Rama's life. During the exile Sita was kidnapped by Ravana, the king of Lanka, setting in motion a war that was staggering in its magnitude. Helped by the monkey-god Hanuman and his army, Rama's troops built a bridge of rocks to cross over to the golden isle of Lanka.

Typified as the ultimate victory of good over evil, Rama decimated Ravana, his brothers and his army.

And now, on the final and tenth day, Ravana (ten-headed and awe-inspiring) is set ablaze, along with this two brothers. The nights preceding Dussehra are celebrations in themselves.

I remember the floats that would wind their way around the city. Bedecked with thousands of lights, would be Hanuman, tearing open his heart to show the image within...Rama and Sita. There's Sita stepping across the Lakshman rekha...the line drawn by Lakshman when he left to search for his missing brother in the forest. And Ravana, dressed as a sage, mocking and angry with Sita's refusal to step over the magical line, until she did and was captured. Each float a diorama of some famous scene from the Ramayana.

In smaller cities and in separate localities in larger ones, was the Ram Leela. I remember, going to see the Ram Leela in a village. I forget which village, how old I was or even when this was. But I remember watching the beautiful Sita's five o'clock shadow, her voice intermittently masculine...and yet my disbelief was suspended, for she was Sita. Sita the long-suffering, faithful wife, who was later cast aside because of aspersions cast on her character by a washerman.

And, years later, when her husband repented and arrived at her ashram refuge to take her back, she handed him his twin sons Luv and Kush, and praying for her mother to take her to her bosom. Whereupon the earth opened up and gathered her daughter to her, leaving Rama, the ideal man, confused by this silent subversion.

But that would be later.

A few weeks after Dussehra will be Diwali. The Indian festival of lights, when a triumphant Rama returned to his kingdom. And each and every home celebrated the return of their King Rama, their queen Sita, and their Prince Lakshman by lighting lamps. Now people use little fairy lights or even candles to light their homes for Diwali.


But even that is later.

Today is Dussehra, when long ago, my body succumbed to germs, but for an instant, I could believe that a scrawny, balding man actually shot an arrow to bring down a demon. And as Ravana and his brothers burned, the sparks lit up the skies, and even as my head hurt and my fever rose, I could not get away from the magic that is Dussehra.

In other parts of India, during this same time is celebrated Durga Puja, where the goddess Durga (the consort of Shiva, and source of shakti, or power) triumphed over another demon. 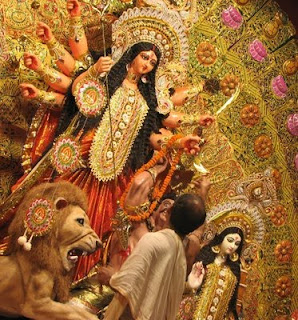 The message, of course is that this is the time of year when we cleanse ourselves of all evil, thought and deed, celebrate what is good. We celebrate our campaign towards ridding ourselves of evil. And at least for an instant, we are pure. Before the coming year takes its toll, we have conquered evil, even if the victory will not last.

Dashrath had 4 sons and 3 wives.