Hold Half an Ounce in Your Hand 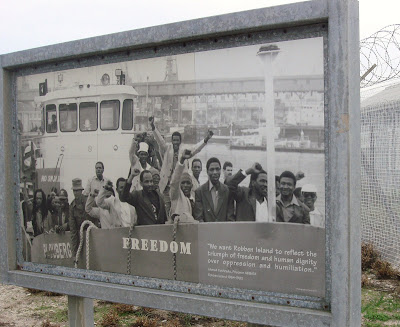 What is the best way to rule? The British did it in India and every colonial power has used some variation of this effective ruling strategy. Every child's history book in India has the answer, and it routinely showed up in quizzes. Divide and Rule. A simple idea really. Divide up the populace into at least two groups. You don't care who's who, you just know you're superior to both of them.

Then give one group just a little bit more than the other. Simple! The group getting the fewer more benefits is not just grateful to you, they become loyal to you. They don't want to lose those few benefits, the little scraps. And here's the bonus, this group will work perhaps even harder than you to keep the status quo. Because if the equilibrium falters they might lose whatever little advantage they have. And deeper than that, they start to believe, to truly believe, that they are inferior, less than human, less than you. And since we all need some self-esteem...they also have one group that they can feel better than. Brilliant, isn't it?

The Belgians did it effectively with Hutus and Tutsis in Rwanda. Imagine the horror if a family had a Tutsi wife and a Hutu husband or vice versa. And yes, during the killings in Rwanda, there are documented cases of husbands and/or wives killing the Hutu partner. Sometimes the difference was only as superficial as a skin that was a few shades lighter or darker. These were not seperate races mind you. Frightening! In India it was the Muslims and the Hindus, of course. And then, there was the added complexity of Anglo-Indians and the various types of Indian Christians.

However, nowhere was superiority/inferiority so firmly coded into law in recent times as it was in apartheid South Africa. But there were those pesky anti-apartheid activists to deal with. You could put them all in prison, on Robben Island, but they couldn't all be in isolation. A better plan might be to divide them. How?
That part was easy. South African society was already divided. There were at least three distinct groups: Blacks, Indians and/or Asiactics, and coloureds (I hate using this term but it is used in S. Africa for people of mixed white-black heritage and does not yet have the same connotations as it does in North America). The division between black and colored was so arbitrary (again shades of skin color) that sometimes families were placed in different categories. And yes, this being South Africa, this category was solidified as part of your identity, especially since all non-Whites had to carry their ID card with them. Not doing so was an offence punishable by considerable jail time.

In prison, the division happened at the most basic levels. Black prisoners only got prison-issue short pants, while Indians and coloureds got long pants. Dignity and self-worth measured by half a yard of cloth. And then there was the food. Not enough food to keep a gnat alive either way. But look at this menu card for blacks (Bantus) versus Coloured/Asiatics (which included Indians, of course). 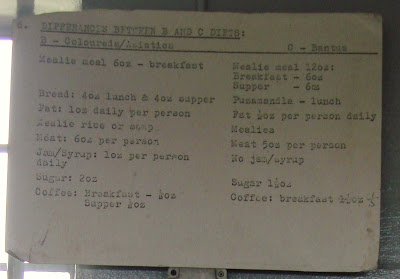 Sometimes this is what it comes down to then. Whether you got 6 oz of mealie meal or 12. Whether you get 6 oz of meat or 5. One oz, that's the privilege you get. Whether you get 2 oz of sugar or 1.5. That is your worth, half an ounce here, one ounce there. Hold an ounce of something in your hand. You can barely tell it's there. Almost like true differences between human beings. Not really there.

Then those pesky coloured and asiatics had to do something unthinkable. They shared their half ounces, they gave away their 1 oz of jam or syrup with their Bantu friends. And in the process they strengthened their ties and their movement.

Perhaps some of those who lived those dark days at Robben Island never lived to see the light of freedom. But, the death of apartheid surely began there somewhere, in those inhuman cells that bore the wounds of deprivation and torture. It surely began when one human being gave another human being a few drops of syrup. And in so giving, he sweetened by just a little bit, the bitterness that was apartheid, the policy that was divide and rule, and the human toll it extracted from all of us. For none of us can truly be unaffected.
Posted by Unknown at 5:09 PM

Ah Jawahara,
This world needs you unfortunately. Your blog enlightens me every time.
Tima

Thanks Tima :-)....but why unfortunately?

Is it just those in power in Governments who can do this? How about other situations like parents with children or bosses and persons working under them, does it still work? I feel that divide and rule theory works less well there, though I am not entirely sure about the reasons.

I thought I'd better come back and clarify that!
Unfortunately, because injustice is everywhere.
T

Sunil, interesting things to ponder. Thanks for visiting my blog.

Jawahara, what an amazing perspective to view this issue from! Although the issue is very familiar, the viewpoint is not.

Sunil, perhaps it doesn't work well in those situations because the perpetrators and victims are much closer physically and emotionally? But it doesn't stop anyone from trying though.

Jawahara,
Nice post. I remember that our cleaning lady used to say that she was a higher caste than the cleaning lady working for the neighbors. The pecking order exists everywhere and it has to be kept.

Thanks for all the comments, guys.

A good informative essay, moved me emotionally, written in a universal stye.......I will also show this essay (in Apartied) to my class.Peace,
Judy