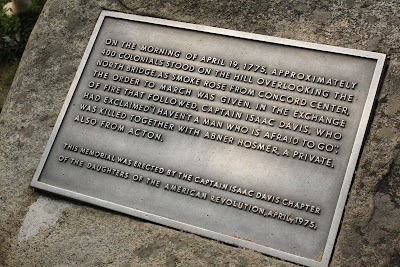 So...I never said it would be seven consecutive days would it? It has been a lovely summer thus far. The weather has been wonderful and on days it was too hot I realized that one of the things I *love* about being back in the US is air conditioning. Yes, sometimes it's too cold and it's not that great for the environment but man, sometimes it's also just that little bit of heaven to step in from a 100 degree plus day right into the coolness of refrigerated air. So sue me...I'm human.

On day two of your virtual journey to Concord we will tour the old north bridge. For all you Americans and history buffs out there...this is where the revolution began. Combine your love of American history with the love of poetry and you come to Ralph Waldo Emerson's lovely poem to commemorate this event in 1837 in his poem "Concord Hymn." I am not much of an Emerson fan but these lines surely resonate to the anti-colonialist in all of us: 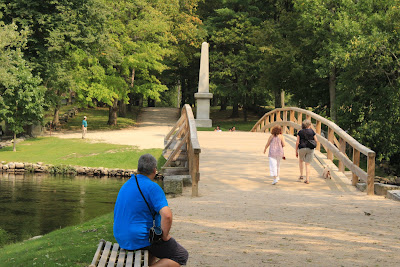 "By the rude bridge that arched the flood,
Their flag to April's breeze unfurled,
Here once the embattled farmers stood,
And fired the shot heard round the world."

I consider our current times some of the darkest days of American history when the GOP is trying to drag us backwards with their no-evolution, leave sick people to die, let's invade the world stances, the economy is in a slump it's not been in over 50 years and there is close to 10% unemployment. Then I remember the shift made by the people whose descendants still live in the Lexington-Concord area. They went from being British subjects to rebels, rebels with a cause. The revolution was not led by people who wanted to go back, they took up arms, these embattled farmers so they could go forward, to become citizens instead of subjects. And citizens are engaged, they have a voice but they also want to know the truth. I hope, for my adopted country, that we become engaged. Even if we are philosophically conservative we can be intelligent. We can believe in God (if we do, I don't) and still believe in evolution. It's not an either/or scenario. Yes, this is what I thought as I ran my hands across the warm wood of the bridge that day and looked across at Daniel Chester's French's statue of the Minuteman with Emerson's quote engraved on the pedestal on which it stood. By the way you might know French from another statue he made: the Lincoln Memorial statue. Ring a bell? But I digress. 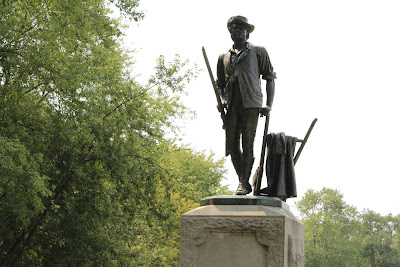 I wonder what the real Minutemen, those brave men who faced down the British empire would think of the pretenders in their name? They were willing to die to liberate their country. They didn't hunt poor, desperate Mexicans on their borders. They were the underdogs, they didn't create the underdogs.

Even as I walked past the peaceful bridge and looked across at the picturesque boat house and the intrepid people canoeing and boating down the Assabet river I was filled with a sense of strange belonging. America and India are not that far apart when we think of our shared colonial past. And our anti-colonial past. We too fought...albeit without guns...to liberate ourselves from the British. We shared a dream. And to various degrees both countries have veered from their onward paths. But paths loop back don't they? I hope both my countries will loop back to the place where we can go forward again.

You have been warned: places with histories like the old north bridge make me sentimental and optimistic in the most sickening ways...as chick-flicks do to others.
Posted by Unknown at 3:29 PM

Been there so many times, that it almost made me homesick.

DL, you should indulge your homesickness and visit soon.

As a child, we memorized "shot heard round the world", Paul Revere's ride and other Revolutionary War tributes. You bring the history alive, Jawahara, and set our present day lives on an equally volatile and important stage of opportunity. We must see it as a time for new possibilities. Your vision is educational and inspirational. Do I need to re-read Emerson? I remember liking his transcendental ideas. Look forward to my journey through concord and through your eyes. Looking forward....Judy

I think I've been to the old north bridge about 4 times. But, no need to visit it again when I see the thing every day passing in a car.